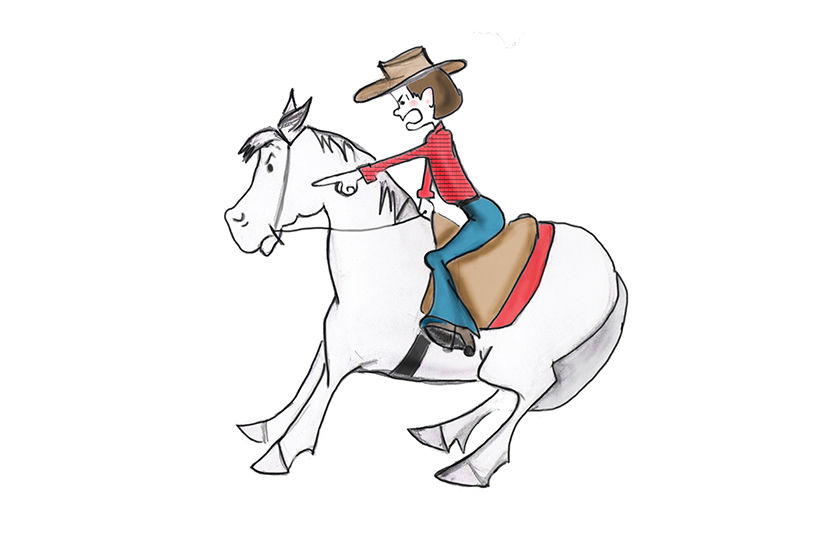 Stops dead in his tracks. Just won’t go. Nope. Ears pinned. Planted. Maybe rears. Ain’t goin’! Line in the sand. NO, NO, did you get it? NO!

The article that started the Book!

The general suggestion for this dilemma is to circle. The thing that makes me smile about this is that it can really show you how clever and precise your HORSE is. If you’re paying attention, every time you circle you end up further from the line than you were before. “How, I say HOW” are they so good at that evasive foot movement? (You have to say that in your best Foghorn Leghorn sstutterr).

Circles are great for lots of things. Softening and bending, cadence, stability, drift, sideways, shortening, hoof management, distance and rope slack, giving to the head – all great circle stuff. Balky horse… not so much. I believe the consensus is that we’re getting their feet moving in a forward direction, but that just isn’t so. Yes, the feet are moving and in relation to the body they’re going forward, but in relation to the earth, NO. That isn’t forward movement when you end up further back. Maybe I should call this the Michael Jackson moon walk.

Let’s review a bit more. You get the horse moving and

as you’re coming around, sometimes left, sometimes right to the hoped for continuation of the defunct line of movement you desire, you nudge, at the very least, or kick or spur, swat to try to keep him moving. uuuurrrrkkkkaaaaaa…. NOPE!

Now, you’re going to spend quite a bit of time circling and kicking…

and generally being frustrated AND NOT accomplishing teaching. So, let’s say that you’re going to spend some time on this anyway. Try this: When your precious Buttercup stops, just sit there for a few seconds and reconnoiter. If Buttercup tries to move right or left, just hold the rein softly out to the other side to stabilize. Meaning, Buttercup, you can stand here facing this same direction, but you can’t go left or right. ALSO, Buttercup CAN backup. YES, allow the backup as long as you maintain the head in the direction you originally desired. DO NOT kick/swat/whatever while the horse is backing. Just sit there with your hands out about waist high as far as your arms go with the reins slack as possible. When Buttercup stops backing or if she didn’t start, count to 3, exhale and give a little ‘bump’ with your calves or swing a rope or something indicating in THIS tone of voice “Hey there, how about we mosey on down the trail?” Don’t repeatedly kick or swat, just ask once and wait a few seconds, ask again and see what happens.

Frequently, if your attitude stays in teaching format, Buttercup will stand there for a while and then just… walk on.

While there can be some more stuff involved, this is the general jist and works like a charm if… YOU don’t get impatient. This is a teaching experience. You want Buttercup to learn that you’re willing to help her through her stuck feet, not shove her kicking and screaming into the void. In no time at all, your horse is trusting that you wouldn’t ask her to go into the void and also figures out that she may as well comply as you’re willing to stick it out longer than her.