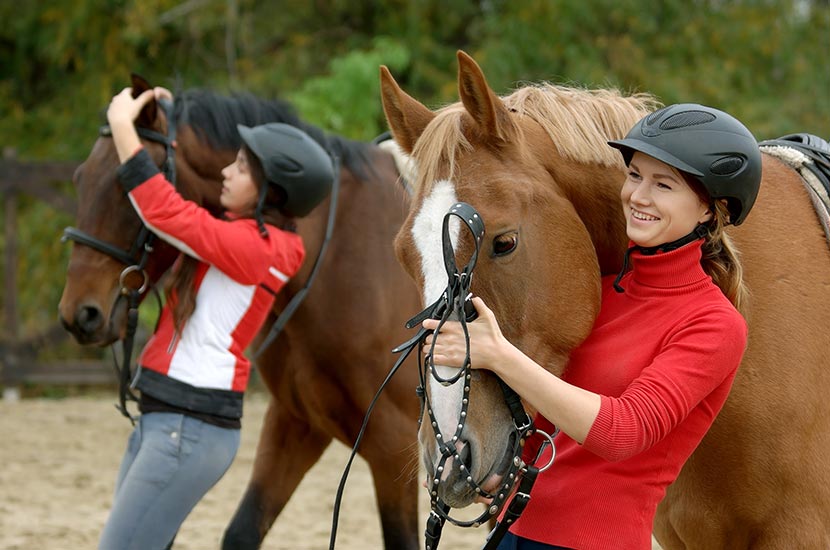 Sometimes, okay frequently, I get emails that go like this: “My horse won’t take the bit. I know he has before because the people I got him from rode him. What should I do?”

Sometimes I’m at a show or barn and I watch, in amusement, as people try to bridle their horse. It’s particularly amusing when the horse is really tall. Yes, I’m easily amused!

I had a student years ago, who worked at a high-end dressage stable. They had a 17 hand dressage horse for sale for $20,000. It took about six people and 30 minutes to get a bridle on this horse and one of them had to be on a step ladder while the other five held, pushed, pulled and generally tried to keep the horse in the vicinity of the ladder so the person up there could reach the horse’s head when it was at it’s highest. Now aside from the six people involved, is there anyone out there who doesn’t think this is hilarious, not to mention ridiculous? I offered to fix it in one session, but they declined.

Let’s do some MATH! Let’s say you’re the trainer and paying the bills for the barn help. Six people times thirty minutes is 3 hours of labor. Let’s just say that you’re really fair in how you pay your barn help and you pay them $10/hour. Hmm…. it’s going to cost you $30 every time that horse gets bridled. Well… I can see that it wouldn’t be worth it to fix the problem. How could that amount to anything. OF COURSE, I’m being facetious.

Now from the horse’s perspective, why in the heck should he take the bit??? If he can garner a ton of points and have fun at your expense as a bonus??? Why should he?

The problem here is the perception of the task. It’s not really about the horse having a bridle on. It’s about the horse being okay/good with keeping his head at torso level while he opens his mouth and takes the bit when you put it in front of him. So… if you’re planning on improving your horse’s technique, improve yours by NOT putting the bit in his mouth and NOT going ahead with anything if the head isn’t at torso level and slightly bent to the left toward you. Just wait! Re-place head with request to stay, either with a hand, touch on the halter, under the jaw or the headstall. Then wait again. If you re-place the head every time it moves out of position, horse will get the idea that you’re going to persist and it would be easier to just go along with you.

Then, when they take the bit and you slip the headstall on, a little morsel of a treat and they’ll be grabbing that bit as soon as you even get it near them.