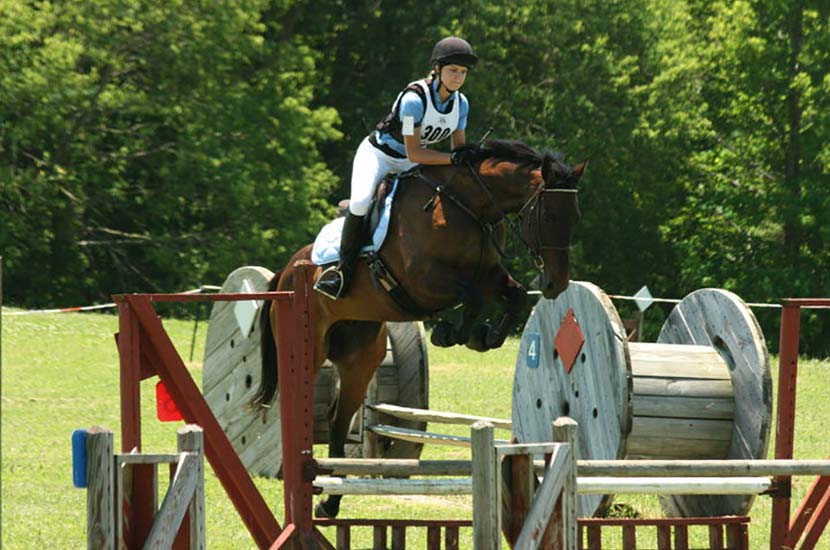 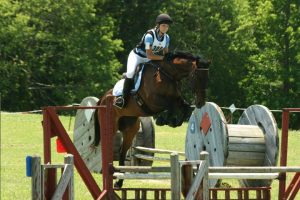 Well, I really like how this horse looks. He’s attentive, sharp, nicely tucked, athletic. He’s also young and relatively new to eventing, I’m told. Just using him as a for instance… What I would like to talk about is that he is expending a lot more energy over a small fence than I would prefer.  I would like him to get more comfortable with a more precise assessment of whatever predicament he’s in. This would then help him think in a calmer fashion.

If he’s jumping this high over a little fence, he stands the very good chance of not being on stride for the next one. Plus, cross-country can be a very taxing go and conserving energy, especially when the fences get bigger, is something to take into account.

Letting horse find his way over fences is a good way to do this. That means that YOU don’t… make him and place him and slow him down and signal for him to go over and when and how and where and why and what. Basically, this means having horse on line, having a couple (I like two) of barrels (horses really jump well over barrels and there aren’t any standards to catch your rope) and not being concerned about how horse works it out.

If horse goes well on line i.e. doesn’t pull on the line, maintains gait, then set yourself up in the center of a circle where your horse’s line on the circle will be right over the middle of the two barrels. You will be directly off the end like a watch hand. Don’t chase him, don’t carry him but do encourage and support him, but stay where you are for the most part. (Red X marks the spot?) Let him go over it at least 10 times in one direction. You can ask him to stop and get a little treat the first time he goes over and occasionally thereafter, too. This really helps them with their confidence and also teaches them not to get excited just because they went over a jump. Chasing on the other hand will cause the horse to speed up after and we don’t want that. That’s why we frequently see horses buck after a jump in shows. They’ve been shoved and are astute enough to know that they have a window of opportunity after a fence to do that stuff. We want the ‘done, what now’ attitude.

Then switch directions and do the same. After some practice you’ll find that it isn’t about the barrels/jump. It’s just that you set horse up on a circle and the jump ‘happens’ to be on the path. I’ll add more later. Put your comments and questions in!