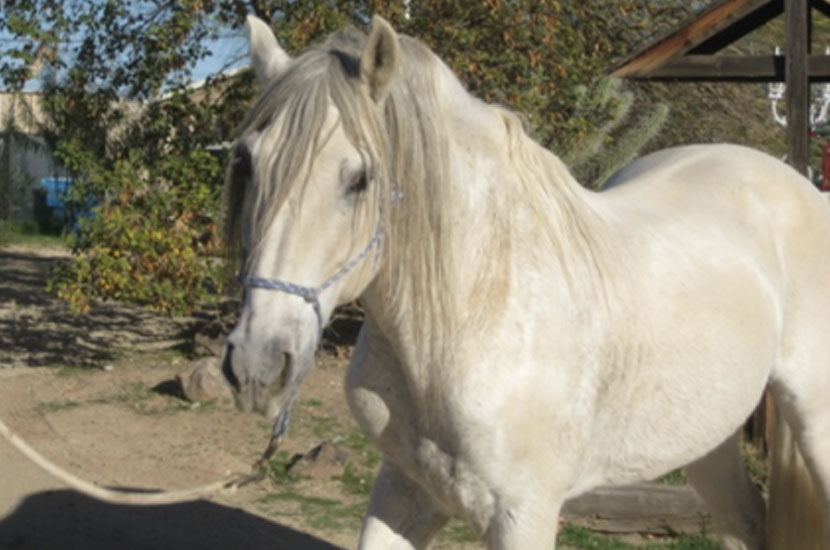 I’m probably a bit different than a lot of folks in that it’s the rogues, renegades, spooks and knuckleheads that intrigue me. The horses other trainers won’t take on. And the ones those other trainer cause. 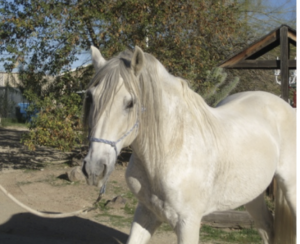 This fabulous Andalusian stallion that I recently started working with falls into that category. He has the highest level of training I’ve ever been on, yet he is horrible and dangerous on the ground. I only was on him for about 10 minutes the first time I was there when I was trying to establish the baseline.

There have been several trainers here in the valley that his owner has enlisted help from and it has gone badly. He tries to be a sweet guy – sometimes, but he also knows his strength and he bites – seriously bites. Took a large chunk out of his mom’s arm last week requiring 7 stitches. I’ve found that he has about a 4 second maximum time for being able to NOT bite.

If a person thinks they’re going to strong arm this horse, he’s going to prove them wrong. As of this writing, I’ve only worked with him a  few times and it’s been interesting to say the least.

Oloroso has horrible and dangerous ground ‘manners’. Rather NO manners. And doesn’t back up. That of course, would be giving way, right? While working on that, meaning get back and stay out of my space you dangerous dude, he reared up at me as I lightly tapped his chest with my stick. I told him that while it was pretty, he still needed to back up. I tapped him again and he did a levade. I laughed and told him that I already assumed he could do that, but it’s not what I’m going for. I need you to back out of my space and stop threatening me.

I tell folks with ‘difficult’ horses that when this training method of changing the horse’s mind about people, being asked instead of being used and such is started, the horse usually gets worse after the first couple of weeks because they realize that they have options. So, they then begin to explore the boundaries or lack thereof that they never had before. This can be extremely dangerous and in this case it certainly is. However, there is no way to prove to a horse that you’re not going to be just like all the other trainers unless you CAN prove it by NOT doing what they do.

Here are some of the background stories his owner has imparted while I’m working with him or that I saw as they where attempting to ‘handle’ him:

M and P have owned Olo since he was 9 months old. However, he has spent most of his life in California with a trainer and is extremely accomplished in the show life of dressage, doma vaquera, tricks and reining with all the paraphernalia that goes with that. However, he was treated IMO as a tool to accomplish all this and stud chains and cross-ties, drop nose bands, spurs draw reins, etc to keep him from biting and never was he taught how to enjoy petting or quietly being near people. He was hit when he bit at the trainers. That isn’t likely to make a horse not want to bite, it’s likely to make him want to bite more and that’s exactly what happened. Well, he’s almost 13 years old now and has been acting like this his entire life. It would be ridiculous of me to think that after a few hours with me he’s going to turn over a new leaf and say, “Thanks Lauren for showing me the way.”

In the trip from his stall to the round pen (I don’t like round pens – I like square, rectangular or irregular pens) he ran over P, tried to bite, reared up, pulled back and swung sideways. Once in the pen, when he was released, he reared, spun and kicked with both hinds right at P’s head and ran off. Lovely, eh?

He was with a trainer here in the valley who put a muzzle on him and then proceeded to poke and prod him with a stick so he would have to accept it. He didn’t. It made him worse. Then, he freight-trained the person, knocked her down and dropped on her. Hmmm… sobering.

Another week down the line and I have this FB post:

Lucky I am! Olo and I had seriously different plans today. Mine was to teach him to stay – stay – stay 5-6 feet back so we can be safer. His, it seems, was to remove two of my ribs with his teeth.
He was unsuccessful. He was standing quietly, at liberty, with his ears up. I had my hand about face high indicating that he should stay. One huge 5 foot lunge with ears pinned and teeth bared, neck and head snaking under my arm and at my ribs. Knocked me backward with both his impact and my attempt to escape and I landed on my ass, but with my ribs intact. However, I did loose my favorite pullover to a hole bigger than a CD. Whewww!
Just in case you’re wondering, I ordered a muzzle the same day he chomped a hole in his mom’s arm and for some reason it’s taking forever to get here and according to the tracking won’t arrive until Thursday. But, I won’t see him again until Saturday anyway. Concern is that since he had that other muzzle experience, I don’t know if that will make things harder or what. We’ll see.

I think I’m going to have to back it down even further. I’m only asking for stay back, let me try to pet you and relax you and learn that you’ll be okay and learn to lead at an appropriate distance. But I’m also the only one getting him out of his stall and that poses an energy problem since that’s only twice a week. I’m also working on left and right and backup since he had NONE of that in his repertoire, but I can’t be safe without these options.